Will bombing Iran ruin your quality of life? 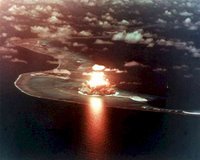 During the Iran-Iraq war (September 1980 to August 1988), Israel bombed Iraq's fledgling nuclear programme. This air strike signaled to countries like Iran that they should not put everything in one place. If The USA or its proxy, Israel, were to do another bombing, including the possible use of tactical nuclear weapons, the task is no longer simple and is likely to escalate to be widespread and prolonged. The consequences will be absolutely disastrous for our way of life.

Here are some interesting facts and specualtions that I obtained from reading an investment newsletter:
Zimbabwe, here we come!
If this happens, many people will be wishing they had still that spare bicycle in the garage propped next to the SUV. Higher energy costs impact on every aspect of our lives and we can expect this knock-on effect to be catastrohic and to go way beyond just the extra cost of a tank of fuel. While we have to adapt to escalating energy costs and shortages, we need time. Bombing Iran at any time would be downright stupid.
When the US invaded Iraq and then began talking tough about Iran, it was hardly a surprise that the Iranians responded by escalating their big defense spend, including getting closer to developing nuclear weapons. Iran, unlike Iraq, really does have a proper army that is armed to the teeth with modern weapons. Taking on the Iranians is not going to be any kind of pushover. Invading Iraq will probably go down as the dumbest Presidential act in US history; attacking Iran would be even dumber.
If you value your way of life, urge your politicians to lobby for moderation on this issue. It is time to exercise diplomacy and not to talk up the situation, or in any other way to add heat to an already tense situation.
at Wednesday, April 12, 2006

IF Iran shuts off its Oil, the US will invade, out of the interests of "International Security"