Heel spurs - Is there any danger in one cortisone shot to each heel?

Gary
I am 53 and suffering from heel spurs. I tried off the shelf orthotics and am going to a custom in a few days. Trying to prevent surgery. My podiatrist says I should try one shot of cortisone only before going to surgery-do you agree? Is there any danger in one shot to each heel?
Thanks


Mike, let me answer your question by telling you about the very first time I witnessed the harm that these injections are doing to fit and healthy people.

He was a talented middle distance track athlete during the 1970's and early 80's, biting at the heels of athletes like John Walker, Dick Quax and Rod Dixon. 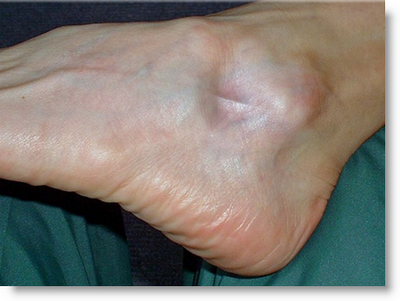 He developed a painful heel spur in one foot. Several courses of physiotherapy gave no relief. The sports physician he consulted gave him a single cortisone shot into the base of his heel. The pain relief was almost instantaneous. He was advised to rest up for a few weeks and then to very gradually resume running under the supervision of a physiotherapist. He carefully followed this advice.

He was out on an easy training run several months later when he felt and heard something snap in his foot. He was unable to run. To his horror, the arch of his foot had collapsed! His running career was over.

When I examined his foot a few years after this incident, I was shocked with what I found: The arch of the affected foot was non-existent. The plantar fascia had completely detached from the heel bone. In addition, the fatty heel pad under the thick skin of the heel had completely disappeared, leaving a hollow about the size of a 50 cent coin through which the heel bone was easily palpated.

That foot had lost its spring. The heel bone was now without its protective fat pad, causing jarring pain even when walking. The collapsed foot was making the foot rotate inwards, causing stress on the knee joint which was showing signs of painful arthritis. Running from now on was completely out of the question.

All of this career-ending damage was due to just a single quick-fix injection. I have since seen numerous cases of permanent damage and disability caused by cortisone injections.

Cortisone is a quick and convenient form of chemical excision. It is a surgical procedure. The trouble with this surgical procedure is the chemical is indiscriminate about which structures it kills off. It can leak into other tissues other than the piece of gristle being injected and it only takes an errant drop or two to do irreparable damage. It does not deal with the underlying causes.

Doctors are well aware of the hazards of injecting cortisone and, like the doctor in the example above, most responsibly follow the strict guidelines for their administration. But these guidelines make the flawed assumption that cortisone can be safely injected into structures like tendon sheaths and tendon attachments. The problem with this handy surgical procedure is that there can be months or even years of lag between its administration and the expression of harm, like the development of an arthritic ankle or a ruptured muscles or tendon. In most cases, the connection may never be made and certainly could not be proven.

In some cases, however, the connection is very obvious because the point of injection can be seen years later in addition to the consequent disability. The photo that accompanies this article shows the injection point into the sore ankle of a female athlete. You can see how the cortisone dissolved the ankle's structural tissue leaving a distinct hollow in the ankle which is now permanently and painfully weakened.

My advice is to go back to your podiatrist and patiently explore all of the possible underlying causes of the heel pain. What is really causing the heel spur? The answer will be multifactoral with issues like poor nutrition, weight gain, weak leg muscles, unsuitable footwear and doing too much exercise all at once, rather than less exercise more often. Medication such as statins and bisphosphonates are known contributors to muscle, tendon, bone and joint harm and far too many 50 year olds are being needlessly placed on these drugs.

Each must be thoroughly investigated and each put soundly to rest before resorting to surgical procedures, including cortisone injections. Such procedures will ultimately be doomed to failure if the underlying causations of your pain are not dealt with. This takes time and discipline.

With surgery there is no going back if it goes horribly wrong, so please give the conservative measures a good and proper go first.

Do you have a question?
Email Gary: gary at myotec.co.nz (Replace the "at" with @ and remove spaces). Please include any relevant background information to your question.
at Sunday, October 11, 2009

I got plantar fasciitis in my right heel at the end of March this year. It became so painful that sometimes I could hardly walk. The GP offered a cortisone injection, which I refused. Even orthodox sources said they often did more harm than good. Instead, I used massage, exercise and Formthotics inserts in my shoes (recommend and supplied by Gary). The massage and exercises gave some temporary relief, but didn't cure the condition. However, the Formthotics inserts worked miracles. They greatly reduced the pain, and after six months the plantar fasciitis had gone. I highly recommend them.