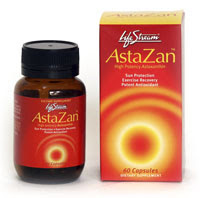 Lifestream AstaZan™ has the remarkable ability to help limit sunburn and help feed and support the skin in its defences against external damage from ultraviolet radiation (UVR). It is a systemic sunscreen active throughout the body that strengthens the skins natural defence system during exposure to UVR. Chronic sun damage and sunburn - especially in the first couple of decades of life - can result in prematurely dry, wrinkled skin and the possibility of skin disease in later life.
Sunburn can damage skin cells (proteins, lipids or even DNA), increasing our risk of visible skin damage and long term complications. In defence our body utilizes an array of antioxidants to disarm the free radicals. Unfortunately under the severe stress of UVR exposure these antioxidant resources can be rapidly depleted.

A clinical evaluation1 of the active component in Lifestream AstaZan™ showed the ability to provide sunscreen protection. The study involved healthy subjects with fair to average skin tones. Each subject was individually exposed to UV light to form a baseline that caused minimal skin reddening. Subjects then consumed the active component in Lifestream AstaZan™ and their skin sensitivity to UV light was re-tested. In conclusion, the active component in Lifestream AstaZan™ significantly increased the amount of ultraviolet light energy required to produce skin reddening, the first stage of sunburn.
How does it work?
It is believed that Astaxanthin complements and participates in the body’s own antioxidant defence system and thereby helps to prevent skin damage. Scientists believe Lifestream AstaZan™ works by helping to preserve and enhance the protective effects of substances such as Vitamin E, Vitamin C, beta carotene, superoxide dismutase and catalase at the skins structure. These effects (in combination or separately) may reduce the acute inflammation reaction of the skin and tissue just below the skin that follows excessive exposure to UV radiation, which leads to sunburn and damage.
Warning: This product is not a sunscreen or sunburn protectant and does not have a sunburn factor. Do not use this product without adequate sun protection such as sunscreen, clothing protection etc.

The unique structural aspects allow it to pass the "blood brain barrier", meaning it can deliver antioxidant activity benefits not only through the blood stream to the cells of the skin, muscles and organs but also directly to the brain, eyes and nervous system. Lifestream AstaZan™ is active throughout the entire body - a far-reaching and potent antioxidant that also helps recycle other antioxidants like Vitamin E, beta carotene, lycopene and glutathione – switching them back “on” and prolonging their functional life.

At the institute for Bio-organic Research, Osaka, Japan, a prominent researcher and his team found that the antioxidant activities of astaxanthin were approximately 10 times stronger than other carotenoids (those studied included beta carotene, lutein and zeaxanthin). Even more impressive, astaxanthin was rated as being100 times more powerful than Vitamin E 1. In other tests astaxanthin was rated as being up to 1000 times more powerful in terms of protecting lipid peroxidation than Vitamin E2 .
Is it a natural antioxidant?
Yes. The active component in Lifestream AstaZan™ has been produced naturally for many thousands of years and is very different from the synthetic variety.

Lifestream AstaZan™ provides esterified astaxanthin, which means it is more stable. Lifestream AstaZan™ is specifically formulated to provide other lipid soluble components and this formulation maximises absorption and health benefits.

Just ONE Lifestream AstaZan™ capsule provides the recommended daily dose of astaxanthin, which is equivalent to 800g of Atlantic salmon!

In both trained athletes and those exercising for general fitness and/or long term health benefits, there is always concern about muscle recovery after exercise.

Lifestream AstaZan™ will help recovery time after exercise and will assist with recovery time by taking nutrition and special rare plant pigments to the muscles and joints where they are needed most.
How it does work?
The active component in Lifestream AstaZan™ appears to assist muscle function by reducing free radical damage during heavy exercise, thus allowing muscles to use more oxygen efficiently and recover quickly. During strenuous exercise free radicals can cause skeletal damage, muscle damage and lipid peroxidation as well as contributing to the loss of calcium within cells after strenuous exercise. Current research recommends the use of dietary antioxidants to assist the process and help with muscle recovery.
Perhaps the most vigorous feat in the animal world is the instinctive migration up raging rivers by salmon. Salmon accumulate the astaxanthin (the active component in Lifestream AstaZan™), in their muscles in preparation for this huge and very taxing journey which can cover thousands of miles. Mother Nature chose astaxanthin to protect their bodies from oxidative stress during this extremely traumatic and aerobic migratory event.

In a double blind placebo controlled study on1 fitness and strength and endurance, physiological test parameters were monitored. There was a significant difference in the group consuming Astaxanthin. The marked improvement in strength and endurance could not be explained by simple lactic acid tolerance or increase in muscle mass since this did not occur.

Do you have a question?
Email Gary: gary at myotec.co.nz (Replace the "at" with @ and remove spaces). Please include any relevant background information to your question.
at Thursday, May 22, 2008