How to treat road rash and bruising naturally 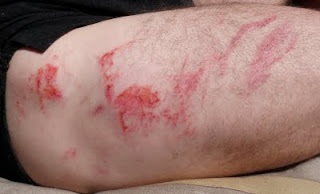 I had a serious crash two weekends ago while competing in a mountain bike race. I was going well, taking it easy in 3rd place when I hit a rut at speed, wiping out and landing heavily on the rut. Ouch! It is best described as being like having your thigh whacked with a softball bat.

Although one leg was dead-as I still managed to finish 6th, the consequence was severe bruising and gravel rash affecting the right side. I was in trouble. Of considerable concern was the fact I was covered in cow shit and mud - INFECTION! 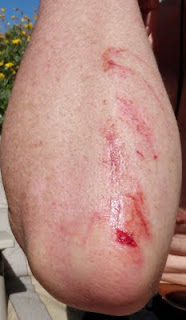 Putting on my Sports Medicine Hat I resolved to pull out all of the big guns to fight the impending infection and to mitigate the damage of the deep bruising of the thigh muscles. This was not going to include antibiotics, antiseptic creams or ice on the bruising.

Upon finishing, I avoided the first aid service on hand and went straight home and then down to the gym where I spent several minutes under a warm shower scrubbing the wounds with soapy hands to remove every bit of grit and muck from the wounds, including blood and dead tissue. Bacteria are like flies: remove the food source and they do not thrive.

I dosed up on Reparen and Algotene which are remarkable supplements that promote tissue healing while preventing oxidative damage to stressed tissues. The intention was to take these for the next two weeks in quite high doses.

Then it was into the sauna for a continuous hour of frying the wounds. Anaerobic bacteria and viruses do not like heat (this is how your body kills infections). See my earlier article about using the sauna for health.

I kept the knee flexed while lying down. By keeping the thigh muscle taut and slightly elevated relative to the body, fluids and blood tended to be squeezed out of the crushed muscles and further 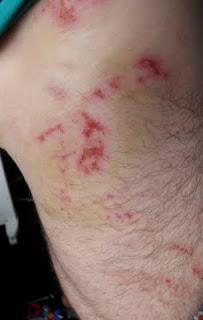 bleeding is pretty much impossible. Given enough time, the blood clots will take hold and further bleeding will stop.

Then it was back under the shower for a further thorough scrubbing of the wounds.

Once home I had a much needed cup of tea and to lie in the afternoon sun to use the natural UV as an antiseptic and to use the warmth and wind to dry the wounds as much as possible before bedtime.

The first two photos show my right thigh and elbow just five hours after the accident. You can see they are clean and already beginning to dry out and all bleeding has stopped. You can see some evidence of swelling in the thigh; but not much considering the force involved.

I slept with great difficulty under a light duvet with no dressings. If you can get away with them, dressings can irritate the flesh,
are a breeding ground for bacteria and they tend to stick to the wounds, causing more damage when attempting to remove them. I 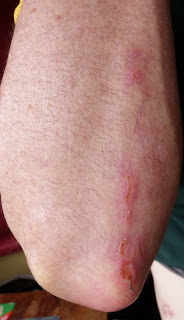 had great difficulty walking the following day due to the corked thigh.

I gave the wounds a good soak in the bath and a further soapy clean and did so daily, taking care not to damage any scabbing.

The next two photos are of the wounds just three days after the wipe out. You can see there is minimal bruising and no sign of infection. Healing is remarkable when one considers my age (56 yrs). I was walking without a limp and squatting fine and back on my bike that day. 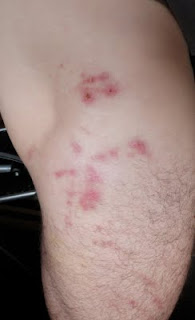 The final two photos are just 10 days after the injury. What you can see is excellent healing and resolution of the muscle damage. At 14 days I competed in the Grand Final of the PNP mountain bike series with a sprint finish against the overall winner of our age group, Marco Renalli, finishing 4th in that race and 4th over the series.

I did not use any dressings, no antibiotics, no antiseptics - just soap and clean water.

There is no need to use ice on a bruise - it can irritate the skin and underlying tissues. As if those poor cells were not under enough stress already! I know, I know - you will be wondering how on Earth I can say this. Well I am because the evidence that ice it is unnecessary is right in front of you (refer the photos).

The Algotene and Reparen are what I think made all the difference, additional to the measures like cleaning, sauna, exercise and massage. 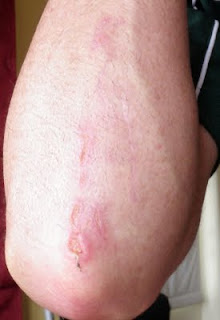 Do you have a question?
Email Gary: gary at myotec.co.nz (Replace the "at" with @ and remove spaces). Please include any relevant background information to your question.
at Sunday, November 15, 2009

As always, totaly blasphemy as far as mainstream medicine is concerned, good to see, keep it up !

farmer cedric uses cow shit on his cuts as a treatment and gets great results!