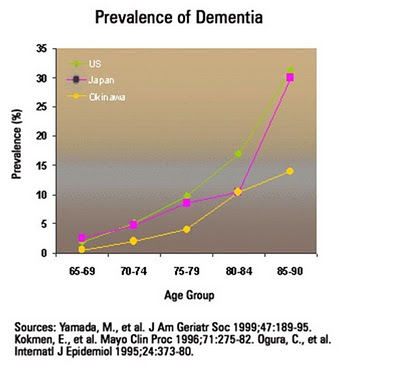 Canadians are developing dementia at such a rapid rate that dealing with the problem will cost a total of more than C$870 billion ($1.1 billion) over the next 30 years unless preventive measures are taken, a report released said.
Canada's Alzheimer Society said more than 103,700 people developed dementia in 2008 in Canada, a country of around 33 million.
By 2038, 257,800 new cases per year are expected, with almost three percent of the population affected.
"If we do nothing, dementia will have a crippling effect on Canadian families, our health care system and economy," said the report, entitled Rising Tide.
"It is the most significant cause of disability among Canadians over the age of 65."
Dementia such as Alzheimer's are progressive, degenerative diseases that destroy vital brain cells.
There is no cure and are few treatments, although drugs can relieve some of the symptoms for a while.
Source and full article, go here.
________________________________________
Gary comments:
Contrary to official advice, there is a lot we can do to prevent the so-called dementia crisis.
Let's begin with the chart at the top of this article: It seems for some reason, that the more "Westernised" we become, the more demented we get with age. As I have written in earlier articles about this matter, the answer to preventing dementia lies in our diets and with staying drugs free as we get older.
Drugs
Drugs do not generally cure or prevent diseases of modern living, they merely plaster over the cracks. Drugs for depression, blood pressure and cholesterol control are among the worst for driving cognitive decline - and the most widely prescribed. 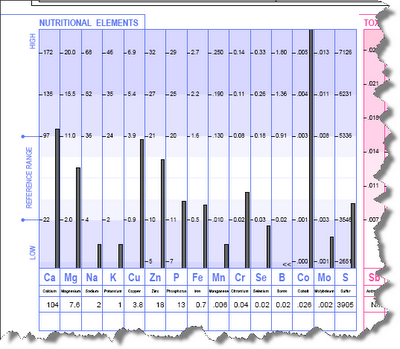 Diet
Having completed over 100 hair tissue mineral analyses over the last year, I am of the opinion that the main dietary driver behind the dementia epidemic is too much dietary calcium relative to other minerals, principally magnesium. (The dairy industry will not like this!)
Please refer to the Hair Tissue Mineral Analysis chart to the left.
Stress of modern life chews up magnesium and sodium like they are going out fashion.
On the other hand, we are being urged to consume more and more calcium and to restrict our salt intake. While this may be good advice for some, my own testing indicates that a low salt, high calcium diet is bad for about 80% of all adults. By the way, when I am talking about more salt, I do not mean refined salt; I mean natural salt with the best being Himalayan Sea Salt which consists of over 20 different nutritional minerals (This will be available from my website in about a week from now)
When magnesium is low relative to calcium, calcium tends to deposit in delicate soft tissues and not where it should be - such as in the muscles and bone. Instead, it deposits in the arterial walls (arteriosclerosis), the skin (premature wrinkles) and even in the gall bladder and kidneys (gall and kidney stones). It is therefore hardly a surprise that young women who are encouraged to eat lots of calcium fortified dairy and not much else end up being the main recipients of gall bladder removal!
Arteriosclerosis = Dementia
Arteriosclerosis is a process of hardening of the normally elastic arterial walls by way of calcification. The main driver of this calcification is too much calcium relative to magnesium. As the large and tiny arterial walls harden over many years, blood pressure steadily increases. Blood supply to the periphery, such as the feet and even the brain progressively diminishes. Risk of stroke and heart attack increases and eventually happen.
As blood flow to the brain decreases, so does cognitive function. Parts of the brain eventually begin to shut down and die due to lack of essential oxygen and nutrients. Dementia!
Furthermore: An imbalance between the normal calcium to magnesium relationship can lead to cardiac irregularities such as arrhythmia, bradycardia, or tachycardia. This is especially true if potassium metabolism is disturbed leading to ECG abnormalities.
This explains why there is more stroke and heart disease among post menopausal women who take calcium supplements as compared to those who don't.
The Hair Tissue Mineral chart above indicates that this person is at risk of developing one or more of these kinds of ailments later on in life. Right now, the main complaint for this person is extreme fatigue and muscles that ache. This is simply corrected by adjusting diet and taking a few dietary supplements. But it does take time to bring about lasting improvements.
The solution to the dementia crisis is to properly test each person's mineral status early on in adult life and correct any imbalances by diet. Sadly, the nutrition and medical professions appear to have been hijacked by very powerful and persuasive commercial concerns who want us to consume more and more value added dairy products and to take more and more expensive drugs.
What I have explained in this article is hard biochemistry. It is good science and I know it works when applied. Why main stream medicine refuses to embrace these natural health technologies is open for speculation; but I think it comes down to the current business model that drives and controls medicine and monopolises health funding. Natural health therapies, including the technologies like the hair tissue mineral analysis I use run counter to this business model and, thus, never get a look in.
Ces La Vie! This sad situation will not change in a long while and it is unlikely that high quality nutrition status testing will become freely available through mainstream health funding. It is over to each and every one of us to take the initiative. The best first step may be to get your Hair Tissue Mineral test (HTMA) done and then act on the results.
Contact me here with your address if you would like to receive information about how to get a HTMA completed.

Do you have a question?
Email Gary: gary at myotec.co.nz (Replace the "at" with @ and remove spaces). Please include any relevant background information to your question.
at Thursday, January 07, 2010