Brain damage during heart surgery may be widespread 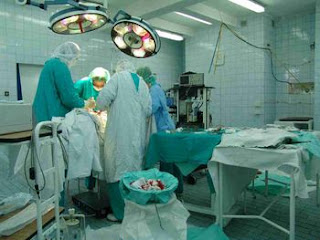 "Sadly I left Government service after discovering that during the heart surgery that I had developed brain lesions (lack of blood or oxygen during surgery).

I was being regularly tested for 8 years before my psychologist suggested a brain scan and it was then discovered I had the brain lesions.
I had been suffering from short term memory loss, anxiety attacks, and inability to multitask."
(name withheld)
_________________________
Gary:
During heart surgery the brain may be damaged by stroke caused by blood clots.

"In summary, the problem has been reduced to a rather simple one. Stroke, produced mostly by arterial source emboli, is the cause of heart surgery–induced cognitive failure. The clinical syndromes fall on a continuum. A few strokes (<3%) are gross and singular, producing an obvious deficit (eg, hemiplegia), but most are multiple. When the embolic burden is high (&10%), an acute encephalopathy ensues. When the burden is lower, no deficit is noted in the acute period, but if the cerebral reserve is low (ie, there is an inevident premorbid brain disease such as hypertensive cerebrovasculopathy), then the patient suffers a nonprogressive cognitive deficit (&8%). In the subgroup of patients in whom the premorbid disease is an inherently progressive disorder (eg, presymptomatic Alzheimer disease that is made manifest by the stress of cardiac surgery), the patient later undergoes a progressive cognitive decline (dementia). This continuum hypothesis explains the disparate results of many studies, because very much like the aphorism of the wise men and the elephant, each investigator was examining a separate part of the problem, but none could see the problem as a whole. All we have to do to deal with the problem of cognitive failure in cardiac surgery survivors is to reduce the burden of cerebral ischemia in those who are selected to undergo the procedure. OPCAB does not address the major issue, arterial source emboli, and thus, not surprisingly, does not address the problem. By selecting patients more carefully with preoperative cognitive and brain imaging methods and then by minimizing intraoperative cerebral emboli using methods that require less manipulation of the heart and aorta, the neurocardiologists of the future might finally save the mind of the cardiac surgery survivor."
http://circ.ahajournals.org/content/113/24/2784.long

Official figures are about 8% but be aware that less than 10% of adverse events ever get reported.  Here in New Zealand, cases that I have had involvement with over the last 30 years have never been successfully reported.  My impression is that cognitive decline that is uncomfortably associated with heart surgery is more common than it is not.

Why is it so difficult to report a case of cognitive decline?

I have tried and failed miserably.  For several reasons:


Can anything be done to improve cognition?


Yes, definitely and the sooner one starts the better.  Even if years have slipped by it is still a case of better late than never.  There are various herbal formulas such as bacopa, vitamins and minerals and nutrients such as omega 3 oil and ubiquinol that may improve cognitive function. To be effective it is best to employ the services of a qualified natural health practitioner with access to accurate nutrient testing.


Yes, folks, blood pressure and cholesterol lowering drugs are among the chief culprits for rapid decline into dementia!

There are usually safe and effective healthy alternatives to pharmaceutical drugs - alternatives that nourish and vitalise the body, rather than poinsoning it into submission.

But it is not just a matter of suddenly stopping one's heart drugs - no way should you do that!  The process of weaning one off heart drugs is a slow and careful process, best done with the cooperation of your doctor with regular testing to monitor progress.  Rest assured that it can be done!

About this website
The advice in these articles is given freely without promise or obligation. Its all about giving you and your family the tools and information to take control of your health and fitness.
at Monday, June 17, 2013