Was Angelina Jolie's preventive double mastectomy a wise choice and should other women follow her lead? 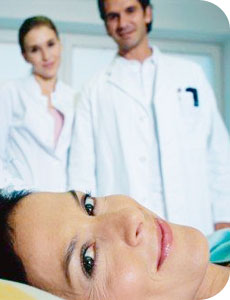 Just how much of the cancer epidemic is actually over diagnosis combined with having no idea which tumours are harmless and which will become fatal?   The evidence is mounting that this is the case:
http://blog.garymoller.com/2013/05/the-evidence-mounts-mamograms-are-not.html

More:
"The debate centres around the concept of "overdiagnosis", that is screening which correctly identifies a tumour, but one which would never have caused harm. It leads to women who would have lived full and healthy lives having treatments - such as surgery, hormone therapy, radiotherapy and chemotherapy - which have considerable side-effects.

"There is no way of knowing which tumours will be deadly and which could have been left alone."

The review, published in the Lancet medical journal, showed that screening saved 1,307 lives every year in the UK, but led to 3,971 women having unnecessary treatment."

What about the genetic factor?  Is it really that BIG a factor?

Just because a woman has the BRCA1 gene it is not 100% true that she will get breast cancer.  One must question why one sister with the gene gets cancer while none of the others do?  The answer is to do with the emerging science of epigenetics: The study of how environmental factors, such as stress, pollution and nutrition influence how and when a gene may express itself.

This is the official viewpoint about the BRCA1 and cancer risk:

Looks grim on the face of it; but just how true is this?

The BRCA1 gene may not really be the cause of breast cancer - It may be just one of many factors and current risk estimates of the "gene factor" may be deeply flawed.  Read on....

This is what the National Cancer Institute says about BRCA1 or BRCA2 gene mutations:


"It is important to note, however, that most research related to BRCA1 and BRCA2 has been done on large families with many individuals affected by cancer. Estimates of breast and ovarian cancer risk associated with BRCA1 and BRCA2 mutations have been calculated from studies of these families. Because family members share a proportion of their genes and, often, their environment, it is possible that the large number of cancer cases seen in these families may be due in part to other genetic or environmental factors."

"Therefore, risk estimates that are based on families with many affected members may not accurately reflect the levels of risk for BRCA1 and BRCA2 mutation carriers in the general population. In addition, no data are available from long-term studies of the general population comparing cancer risk in women who have harmful BRCA1 or BRCA2 mutations with women who do not have such mutations".

"Therefore, the percentages given above are estimates that may change as more data become available."

What this means is  the NCI and nobody else really knows the true level of risk associated with the BRCA gene.


Rather than regarding ourselves as being helpless to the power of the gene, we need to focus on our position of power to influence how our genes express or don't over a lifetime.  For example, the powerful role of iodine in cancer prevention and cancer treatment.  99% of New Zealanders are deficient of iodine:
http://blog.garymoller.com/2010/10/breast-cancer-prevention-and-iodine.html

Or the importance of vitamin D for preventing cancer of which 90% of Kiwis are deficient: Up to 75% estimated reduction in cancer!
http://blog.garymoller.com/2009/07/reduction-of-cancer-mortality-by-75.html

Or the importance of selenium which is deficient in NZ diets:
http://www.ncbi.nlm.nih.gov/pubmed/16313696

Or the importance of beta carotenoids for preventing cancer and slowing its progression.  The modern diet can be very low in these important anti oxidants:
http://www.cancer.gov/cancertopics/factsheet/prevention/antioxidants

Or the role of heavy metals in the generation of cancer, mercury for example. Sadly, every New Zealander is exposed to heavy metals.  Young women are encouraged to eat tuna which is a source of mercury as are most large fish:
http://www.thenaturalrecoveryplan.com/articles/research-cancer.html

The point about all of this is this:  By implementing a few simple dietary and lifestyle measures, you can drastically slash your risk of getting cancer.  You are not a slave to your genes.  You can influence them - Greatly.

The final word goes to the author of the article (Sayer Ji) that follows:
Did Angelina Jolie Make a Mistake by Acting on the 'Breast Cancer

About this website
The advice in these articles is given freely without promise or obligation. Its all about giving you and your family the tools and information to take control of your health and fitness.
at Wednesday, June 05, 2013