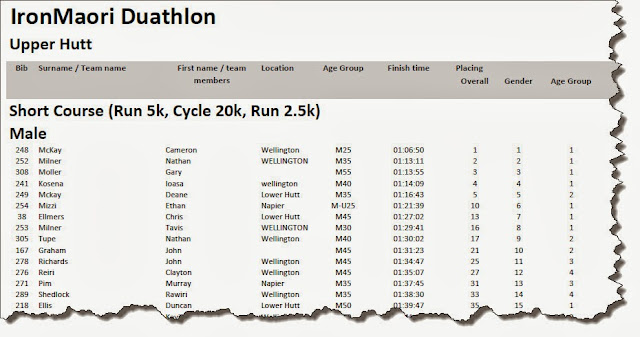 Last Saturday I competed in my first duathlon in about 28 years, the Iron Maori in Trentham, Upper
Hutt.

It had a very good turnout, although I have no idea how many people there were, other than to say there were a lot.

Being my first race in a long time and, knowing I had a tough mountain bike race Sunday morning, I opted for the sprint race.

The opening run was tough mainly because I have done very little running over recent years and I finished in about 20th place.  The cycle was a different story: I managed to catch my bother in law, Ioasa, and we worked well together to pull in every body else, other than the two leaders, although we did pass him at one point.  Where we really made it up was on the hills.  Being light we hammered the hills.

Ioasa and I finished in 3rd equal but he slacked around, as per usual, in the transition, giving me a good enough lead to just hold him off for 3rd.

I'm very happy about that result because I am just a few weeks away from my 60th, still getting faster, and the only duathletes that beat me were two of the best and they are much younger.

About this website
The advice in these articles is given freely without promise or obligation. Its all about giving you and your family the tools and information to take control of your health and fitness.
Candida and Fungal Infections? Gary Moller recommends you explore this programme: Click Here!
at Wednesday, October 02, 2013