After the American Diabetes Association received a large gift from a 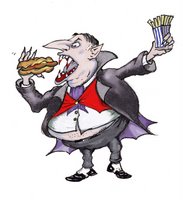 major manufacturer of sugar-sweetened beverages, its top medical official is claiming that sugar has nothing to do with diabetes.

In an interview published on 16 May in Corporate Crime Reporter, Richard Kahn, the chief scientific and medical officer with the American Diabetes Association, said: "What is the evidence that sugar itself has anything to do with diabetes? There is no evidence."
On 21 April, the ADA announced a "three-year, multimillion-dollar alliance" with Cadbury Schweppes Americas Beverages, which produces sweetened soft drinks that are implicated in the epidemic of obesity and diabetes in the United State. Its parent company Cadbury Schweppes, is the third-largest soft-drink manufacturer in the world, after Coca-Cola and PepsiCo.

"Saying that sugar has nothing to do with diabetes is like saying that tobacco has nothing to do with emphysema," said Gary Ruskin, executive director of Commercial Alert.
"The American Diabetes Association has been so corrupted that they have sunk to the mentality of tobacco scientists who denied the link between tobacco and lung cancer."
(Source: Corporate Crime Reporter press release, 16 May 2005, http://www.corporatecrimereporter.com/diabetes051605.htm)

The complete report above is a very interesting read. I will soon be writing an article about the situation here in New Zealand about how I believe some advocacy organisations appear to have compromnised themselves to the point of selling their supporters short.
at Sunday, July 08, 2007

another factor is that too much fat in the diet reduces the effectiveness of insulin in the blood, the pancreas has to produce far more insulin as a result often failing in the end leading to insulin dependant diabetes.
refined carbohydrates and sugars also put pressure on the pancreas requiring large amounts of insulin to be produced quickly by the pancreas to stem a rapid rise in blood sugar from these foods.
eat unrefined food as much as possible, foods high in fibre slow the release of energy into teh blood stream reducing stress on the pancreas. you might be fine eating refined foods today but they are not doing your body many favours and you may find one day you too have diabetes as a result of your diet.