Does it work; or is it just another scam?

I competed in the Crazyman last weekend. It was one of the most gruelling events I have ever done (came 2nd in my age group, btw and cramp-free). Cramp was a huge problem for many, if not most of the competitors in the Crazyman. One of the sponsors gave away "Phiten" titanium anti-cramp patches to every competitor and I spent most of the race staring at these things that were plastered on hamstrings, calf muscles and shoulders. As, I said, there was no shortage of cramp during the race - this, despite the liberal presence of Phiten patches. 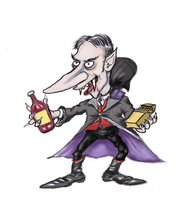 slick marketing that makes liberal use of some of the World's most famous athletes. Being well-paid professionals, they must surely be right when they swear by the magical properties of these products.

I am sceptical. I keep thinking of "snake oil"

Apparently, a commonly used trick is to have the customer lift a concealed brick with an outstretched hand which they have initial difficulty with. After applying the titanium, the lift is executed with relative ease and this is attributed to the magical properties of the product. Of course, this is utter rubbish: The improvement is the result of the brain reprograming for the 2nd effort after being deceived by the first attempt. It had nothing to do with the titanium.

Phiten claims to have a secret method by which titanium is rendered soluble in water, as well as rendering it with special bioelectric qualities. Search as I did, I could find no published research about this method that they call "Phild". I have a reasonable academic background in chemistry and I understand that titanium is a very hard metal that is extremely corrosion resistant and insoluble in water. Until I am shown the science behind the secret Phild process, I think the claims are bunkum.

I seriously question the claim that wearing a titanium impregnated patch, bracelet or beanie will have any effect on deep underlying muscle. They would have us believe that the titanium ions, that have somehow been rendered water soluble, now magically penetrate the waxy skin layer, the thick subcutaneous fat layers and then the muscle sheaths to finally penetrate the muscle and then exert some strange bioelectric effect on them. This is a miraculous feat and one that few other products have ever mastered, including anti-inflammatory rubs that are heavily promoted to athletes, although they are also of little practical benefit to the user.

These products serve only to line the pockets of already wealthy executives - probably in New York.

Of course, I would welcome a representative from Phiten to post a response to this article - to put the record straight by presenting peer reviewed and published scientific evidence that validates the claims of their advertising and their sales representatives.

While we await this evidence, my advice for avoiding muscular aches and pains associated with exercise and competition is to stick with tried and proven methods, including preparing properly with a tailored fitness programme, a suitable diet and stocking up body stores of magnesium and other minerals. I have already written much about this and I can tell you that these strategies really do work for the majority of athletes.

Oh! - while I am at it - can somebody tell me this; can I improve circulation and reduce cramp if I rub titanium-containing sunblock all over the affected parts? Its much cheaper.
at Wednesday, May 10, 2006

anyone got any scientific studies into this? how do we know if it works for one person its not the placebo effect? given that they have supposedly mucked around with titanium to change it from being non water soluble to water soluble what other effects are this metal having on the body? most metals in the body are only required in the most trace amounts?
its like when the first x-rays came out doctors used to make x-ray movies with people standing in front of the x-ray machines for prolonged periods of time! until they realised that this killed the patients some time later!
but hey good on you all you guinea pigs out there for furthering the cause of pseudo science!

"There are more things in heaven and earth, Horatio, than are dreamed of in your philosophy." There are many things that appear nonsensical to scientific mindsets but many of us know that subtle fields affect us and often very profoundly, if indeed that is what this is. And let's not pooh-pooh the placebo effect. It is one of the most effective remedies going and without side-effects.

We have been subjected to all kinds of health scams over the centuries that have made some people very wealthy and a lot more much the poorer and in no better health.

I do not have a problem with people wearing a copper braclet or putting a bottle of water on their lawn to deter the local pooch from doing what comes naturally. Cheap and harmless things that fit in the "old wive's tale" category. Do they work? Who cares? I don't.

What I do have a problem with is when an unsubstantiated health claim for an inert material that is magically transformed by a secret process into a healing marvel for all kinds of ailments and is then slickly packaged and aggressively marketed with the intention of making somebody a big load of dosh.

We have every right to question the validity of the product's claims, regardless of its celebrity backing, until published peer reviewed research evidence is presented of its efficacy.

I think this is a reasonable request, which I would point out has yet to be fulfilled.

With regards to placebo effect. Yes, it may be a factor. All I can do is repeat what I observed in my original posting about the Crazy Man - there was no shortage of cramping, despite the liberal prescence of the anti-cramp stickers!

By contrast, I used a scientifically proven method of reducing cramp by ensuring my magnesium and other mineral stores were topped up prior to the race (go to e-pubs section of the freerangers website and read the "guidelines for using magnesium complete"). I had no problems with cramp, although I confess I was on my very last legs at the finish tape. I was sooo tired!

It clearly doesn't work. But more successful than the Nigerian Scams.

Hello :) Interesting article. For me it doesn't matter. It works *for me*. In my sport (marathon running) I'd say that over half of the race is mental. I use every mental trick to give me the edge. I love my Phiten products... so what if it is the placebo effect. I've run better, faster and less injured since I've had my Phiten compression socks! :)

I suffer ITB syndrome in my right knee and run half marathons, all of which are done on a cocktail of anti-inflamatory products. The last one I ran with nothing but titanium tape on my bad knee, and it was the knee that lasted without pain and also in the days following no pain what so ever, but my good knee was sore for a few days. So I guess it works for me.

Amazing! Now can somebody please explain how these products work?

what about this product or products like it. every day one comes out with a claim

check out this link please and let me know what you think. is it real??
http://www.youtube.com/watch?v=jznFTjXWo8o

Re: the post above, please go here for the short article I have written

I have just started using a bracelet and for me I have noticed more energy, a more relaxed feeling and little or no pain...Is it in my mind, maybe, but it works for me, I have my husband using it and so far so good.....

It works for me. My shoulder pain was 80% gone after 30 seconds of wearing the wristband so I was really impressed! The result amazed me. I love it!

I also would like to know the science behind this product but more importantly...does it work for erectile disfunction?

I have worn a titanium wedding band for years, before I have even heard of these "healing" products; I have felt no difference in my athletic performance when I wear or don't wear my wedding band. Beats me on how and where they came up with this, but its a marketing wonder and people are eating them up like candy! The Japanese are great at making people believe in products like this because they have such a wide interest in engineering and science. They bombed us once and they're bombing us again, lol! I would really like for them to come up with a mosquito repellent that actually works! I'd buy that ha ha ha!

Sure, it shouldn't work based on today's science but I've worn the necklace for a year and noticed increased energy every time I have it on. The pain patches have also worked well for me.

I don't think I was put on this earth to live my life by the results of "clinical studies". Realize that in ten years much of what we think is "proven science" today will be debunked and new ideas will take over.

It's good to be skeptical in general but at $10 for the pain patches and not much more for the 30x necklace, these were inexpensive indulgences and I've been very pleased with the results.

For the rest of you, please avoid buying these products for you are obviously so much smarter than the rest of us - oh, you haven't even tried them? Guess that makes you more of an expert than I.

some says Phiten is a scam but hey are dead wrong!! when I had my sciatica, I used their magnet tape to be placed on my acupressure points and it worked.. alternative medicine before being sliced up... I have all my boys on my basketball team to use it...it helps their balance and less cramps.. you don't even use the product but make comments on it.. you have no proof either. In California, beach volleyball players are using it,ask them! it works...

I find it curious that one of your page advertisers is Trionz, another scam?

Thanks for pointing out the apparent contradiction about advertising on this page.

The problem is with Google Adsense. I could load "exclusions" for the likes of Phiten etc; but there are too many and I do not have the time, so will leave it as is and let readers use their good judgement when it comes to responding to what is advertised on this page and others.