2006 Commonwealth Games - who were the biggest losers?

Have you seen the reality TV programme, “The Biggest Loser”, in which grossly obese men and women compete for a prize by trying to lose the most weight? I cringed in horror at the sight of these masses of humanity lumbering their way through violent exercises and extreme diets: Who will be the first contestant to destroy a knee, back or even drop dead! The recent Commonwealth Games demonstrated a much better variation of the “Biggest Loser” game.

When I arrived at the Commonwealth Games Athlete’s Village, as manager of the Cook Islands cycling team (consisting of one cyclist), two things stood out from everything else: The army of smiling and helpful volunteers and the food!

From the moment we stepped off the plane at Melbourne airport, we were surrounded by Games Volunteers. All we had to do was switch the brains off and follow. Everything was done for us from that point onwards. These volunteers were ordinary people, mostly from Melbourne City, who were giving freely of their time for a month to cater for the thousands of athletes, officials, dignitaries and sports fans who descended upon the city for the Games. It was over-kill: For just 4,500 athletes, there were over 16,000 volunteers! We loved the attention.

When I entered the huge athletes’ dining hall for the first time, my immediate reaction was; “To Hell with the training and competition – let’s see how much we can eat over the next few weeks!” The menu included dishes from every continent and these varied every day. Open day and night - and free! - We could eat as much as we liked and as often and wheneve 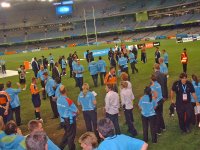 I was convinced that everyone was going to put on weight – and lots of it.

How wrong I was; the opposite was the case with substantial weight losses being the reported norm. How could this be?

The reason was simple: We walked everywhere within the village. There were no cars inside the village which covered several blocks. Sure, there was an excellent internal bus service and a few bikes; but most of the villagers preferred to walk because it was the best way to meet others, especially the athletes from the African, Oceania and Caribbean countries who tended to congregate to sit, chat and play on the streets. 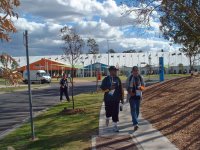 A typical day began with the walk to the dining hall a few blocks away, stopping to chat with athletes along the way. After a good feed, it was back to our unit, usually with a diversion to a café for a decaf coffee, a bun and more chatting with the interesting folk of the Commonwealth. Then there was another walk to get out of the village to get to the training or the competition venue. Lunch, dinner and evening supper were pretty much the same routine of walking, meeting and greeting – and eating, of course! I made a resolution to sample at least one new ethnic dish each time I sat down for a feed.


So what was going on here? Why did we lose weight?

What happened was both simple and brilliant at the same time.

For a start, there was little snacking; but still a ton of calories to consume. It was 3-4 square meals per day with maybe some floury Australian pip or stone fruit in between (I craved for crisp, juicy NZ fruit). This meant we were taking in large dollops of delicious, nutritious, high calorie food that stimulated the metabolic processes throughout the day. This is in contrast to a low calorie diet that encourages the body to shut down its metabolic processes and to conserve body fat.

Then there was the exercise in the form of walking, again in generous dollops that were spread from dawn to dusk. With fuel to burn, the internal metabolic fires were vigorously stoked by the exercise to burn white hot throughout the day.

In contrast, calorie restriction shuts down the metabolism. This is a natural survival mechanism. While exercise counters this metabolic shutdown to a degree, any extra calories are immediately scavenged and stored as fat. Nutritional deficiencies are the norm with the modern calorie restricted diet and these eventually lead to all manner of ailments ranging from depression to osteoporosis.

All of the volunteers, I asked, reported either weight loss of more than a few kilos and/or thinner hips and waist. It was important to ask this of the volunteers because they were not highly tuned athletes. For the most part, they were typical, sedentary Australians with a predominance of them being older and many retired. With all of that free food, weight gain should have been the norm. But it was not the case because they had a generous supply of rich metabolic fuel and they stoked their metabolism with exercise and oxygen. 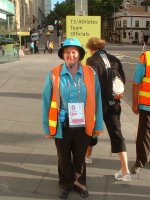 The Commonwealth Games Athletes’ Village was a working model for communities of the future. Or, is this a case of going “back to the future?” There will be little need for private cars. Design and layout will enable access to community facilities either by walking, bicycle or free public transport. Obesity and the diseases associated with it will be a rare occurrence. People will know and interact with their neighbours.

In the meantime, while we patiently wait for the politicians, bureaucrats and the designers to work out how to turn us all into losers, we can get on with the job for ourselves: Eat well, get outside and walk everywhere - and greet everyone you pass along the way while you are at it.
at Friday, June 16, 2006