Goodbye to the nation of Kiribati and its unique culture 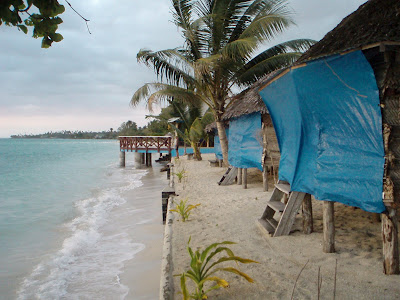 Cycling around the beautiful South Seas islands of Samoa is as close to Heaven I will ever get. However; the pleasure is tinged with several causes of sadness as the unpleasant incursions of Western civilisation threaten a unique culture and pristine environment.

90% of all the reefs I swam in Samoa are as good as irreparably dead from the combinations of increasingly ferocious and frequent cyclones, pollution, over-fishing and deadly high water temperatures.

As the reefs die, the waves make their way inshore. The photo (Above left) of a Samoan resort shows why investment in such ventures is not a wise way to use your money nowadays! One elderly Matai (chief) complained that he had lost the best part of 40 meters of prime coastal land to the ocean over the last decade or so.

As tropcial water heats it expands: Combine just a fraction of a percent expansion of a huge body of water with a cyclonic storm surge and you have catastrophe!


Kiribati
With an average 2 metre height above sea level, Kiribati is one of the “frontline” nations whose continued existence is threatened by the twin effects of Global Warming - Sea level Rise and Climate Change. The 5 minute video below is an outline of what Kiribati people face, their diminishing options, and a heartfelt appeal to the world community." It was made by a friend of a friend of ours and I have agreed without hesitation to publicise it.

A question for the people of Kiribati and their leaders:
After viewing this video I have some questions.... Why all the cars on these flat tiny islands?  Isn't it time to stop contributing to your own demise?  Why not become a beacon of hope for the rest of the World - Isn't it time to get over your addiction to the motor car?  Isn't it time to become self-sufficient once more?

This can be done without having to give up the comforts of modern life.  Why not return to traditional foods and recipes and stop importing rubbish food that only makes your people lethargic, fat and sick?  Why not use bicycles to get around your tiny island?  Why not install wind turbines and solar collectors and use electric motors for additional motive power?  (The Premier's limo could be an electric assisted recumbent bicycle).  Why not use coconut oil to make the little fuel your country will need ?

Do you have a question?
Email Gary: gary at myotec.co.nz (Replace the "at" with @ and remove spaces). Please include any relevant background information to your question.
at Saturday, November 01, 2008

This is a nice bike, i wonder how it would feel like riding one.