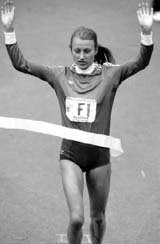 I'm just turned 32, 5' 11", 178lbs. I played gaelic football (similar to Australian Rules) many years ago but never at a really competitive level and my main exercise through life has been at the Gym - my fitness therefore peaks and troughs considerably.

Recently my brother in law enticed me to get involved in road running and on April 17th this year I took it up in earnest. At the beginning I struggled to manage 2 - 3 miles in a session but very quickly have found my fitness increase and can now run 10 miles (once a week), my normal run is around 5/6. All of this led me to needing some major goal or focus, because I know that using fitness alone as a goal will be a short lived thing. I had therefore decided to run a half marathon in september with the possibility of a, slow, attempt at the Dublin Marathon in October.

A recent Gait analysis showed that while my right foot was more or less normal, my left foot noticeably over pronated, and I bought the relevant pair of supportive runners. However, my last two runs (Saturday was circa 9 miles, and today was circa 11 miles) have left me in pain in my left knee. A dull ache below the knee cap which intensifies when I walk down stairs for example. On sturday it vanished after a nights sleep but today i fear differently.

The dilemma I face is that while I can comprehend the possibilty of over use - is this now destined to be a weakness which will prevent me from achieving that goal? (I only want to do one!! 10k races will satisfy me after that!)

I'm attending the physio on Thursday, but would be interested in another persons opinion based on experience. Is this generally a case of let it recover and take the right preventative actions or a sign that what I'm trying to do is just going to be beyond me.

John, I have been running competively for more than 40 years and my favourite race distances are between 5km and 15km. While I have run more than a dozen marathons, all sub 3 hours, the reason I am still running well is that I gave up the longer races about 20 years ago.

Short races, especially the off road ones, are thrilling ways to thrash the body without doing lasting damage. Marathons are the modern version of the Middle Ages past-time of Monks who travelled the countryside in public displays of whacking their heads with planks of wood.

It takes about 8-10 years of solid training and racing over short distances before one can undertake the modern equivalent of Mediaval flagellation (the Marathon) without risk of lasting harm.

And there is lasting harm like worn out hips and knees, shot tendons, gristled muscles and chronic fatigue. Running is like anything healthy: There is an optimum level and too much of a good thing can do more harm than having too little. The marathon is too much for all but a few freakish elite. These elite usually weigh less than 60kg and have at least 8 years hard training behind them.

John, I am not telling you to not do a half or full marathon; what I urge you to do is to plan a very gradual buildup in strength and fitness over several years. Muscles and cardiovascular responses to running are quick; whereas strengthening of bones, cartilages, tendons and ligaments are very slow - years in fact. So, stick to the short, sharp distances and never exceed your capacity to heal and grow stronger between runs. If you get the cart before the hors 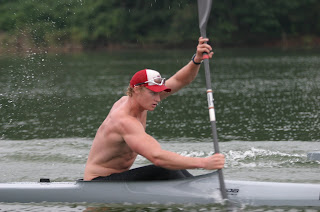 e and run a marathon too early, your knees may never be quite the same again, compromising your plan to then stick to the shorter distances.

Finally, John, make sure you have a few alternative exercise forms that you do each week: Cycling, swimming, canoeing for example. Have these and you will never need to visit the physio ever again. As soon as you feel a niggle - STOP and switch to your alternative exercise for a few days before carefully resuming the offending activity. This is the best physio.

Do you have a question?
Email Gary: gary at myotec.co.nz (Replace the "at" with @ and remove spaces). Please include any relevant background information to your question.
at Tuesday, June 02, 2009