Updated: Are the vitamins you're taking actually making you healthier? 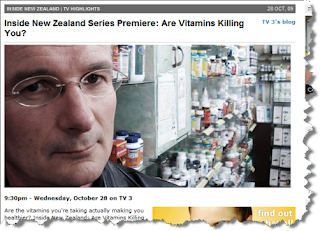 "Are the vitamins you're taking actually making
you healthier? Inside New Zealand: Are Vitamins Killing You?, screening on Wednesday, October 28th at 9:30pm on 3, explores this question by making eight volunteers - mostly high vitamins consumers - go cold turkey for six weeks.

Many New Zealanders believe the way to good health and longer life is through the daily use of vitamin supplements. But not everyone agrees. Professor Rod Jackson of Auckland University says the scientific evidence is clear - people who pop vitamin pills die younger.

"The best evidence is a review of over 60 randomised trials of almost a quarter of a million people worldwide - and the evidence is that those who take vitamins have an increased risk of death compared to those who don't," Professor Jackson explains."
___________________________
Gary Moller comments:
I totally agree that taking megadoses ofvitamins; especially where the individual need is not established is wrong and has the potential to cause illness.

However: The study Professor Rod Jackson refers to is flawed and since been widely discredited.

"The problem is that this JAMA article was a flawed hatchet job not worth the paper it was written on. Out of 748 vitamin studies, the researchers selected only 67 focusing on high dose synthetic vitamins, and excluded all the others showing benefit. This called selective sampling."

Here is the best explanation I have read of why this study is rubbish :
http://jeffreydach.com/2007/05/05/vitaminsjeffrey-dachdrdach.aspx.

Vitamins, minerals, amino acids, fatty acids and more are essential for life, including preventing and combating disease. Where there is an identified deficiency, then supplementing with those items that are deficient to bring these levels to their optimum balance is totally justified.

However; taking additional vitamins and minerals where no deficiency is identified is not justified and may contribute to relative imbalances alongside other nutrients.

I hope that Professor Jackson and other experts who are going to be in the series explain this and do not use the series as little more than an opportunity to bag the natural health industry. I hope they explain that vitamins and minerals do promote good health, combat disease and prolong life and its quality - where their need is identified.

I hope they explain there is a health difference between many natural vitamins and their synthetic counterparts. I do agree that megadosing on any vitamin where there is no need is not a healthy practice; especially if the vitamins are synthetic. 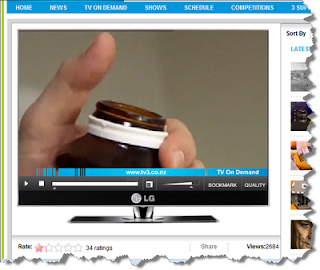 There was fearmongering by calling vitamins dangerous. So, taking vitamins is as dangerous as passive smoking! You have to be kidding! There has not been a single death in New Zealand from vitamin overdose.

There was no distinction made of the differences between synthetic vitamins and their natural counterparts. They did not tell us that we can safely prescribe natural dietary beta-carotene which is a powerful anti-oxidant that also provides provitamin A that is converted into vitamin A in the body as required.

They did not help the subjects in the programme other than to tell them not to take vitamins and to eat a balanced diet. It was obvious from the body language of the participants that most of them were unconvinced. The least the two medical experts could have done is to use their access to testing services and nutritional expertise to assist them with working out the most proactive nutrition programme for each individual's actual needs.

Sadly, both of the experts, including the epidemiologist Professor Jackson, lacked the most essential ingredient: Training in Human Nutrition, beyond the little that is taught while at Medical School. What is formally learned is heavily influenced by the most influential "other" in medicine - the pharmaceutical industry which would love to see vitamins dispensed by prescription only. Was this the real purpose of the programme: A cynical softening up of the public for the crushing of the Natural Health industry? I think that may be going too far; but there are people on both sides of the argument who sincerely think this is happening!

All-in-all, the programme was rubbish.

I would much rather have seen a programme that does some proper testing, including blood tests and a HTMA for:
We could do the same for say, a child with ADD or autism. Or how about attempting to reverse Type II diabetes?

Do you have a question?
Email Gary: gary at myotec.co.nz (Replace the "at" with @ and remove spaces). Please include any relevant background information to your question.
at Thursday, October 29, 2009

more is not necessarily better yet a great deal of vitamin supplements are packed with the highest doses that the manufacturers can pedal. why? because people are more likely to buy them in the perception more is better? and or because they believe more is better despite a complete lack of consistent evidence that most people will have any benefit from them. then theres the argument of are synthetic vitamins work as well as natural?
I"ve tried taking massive ranges of vitamins, i have consistently found that taking small amounts at or less than the recommended daily allowance for most other than the antioxidant vitamins benefit me the best.

I watched this program. it was rather vague, they kept going on about high levels of vitamin A and E in several of the people measured, they stated, this could shirten th lives of these people.
they didnt state how much these people were taking. they may well have been taking well above the Recommended daily allowance or the Upper Tolerable levels, we werent privy. Normally to get high blood levels of these vitamins, you would need to megadose for a long period of time. it was interesting to note several people were deficient in Vitamin D and were advised to take a vitamin D supplement in winter. there is still a lot of sound ressearch that refutes the information these experts were giving and says lifespan can be increased by supplements, vitamin C is a classic example. trials of tens of thousands of people over decades prove this. just be sensible and don't go overboard with your fat soluble vitamins which can build up in the body and you arent likely to have trouble.
some research only uses old and ill people for their studies and come out with skewed data. liek research on brain deterioration in he past was widely publicised, , it was taken from people in old folks holmes who didnt have very balanced lifestyles, werent as well stimulated mentally and physically as people who were still independant. and they decreed your brain would decline, howeverlatest research shows your brain can go on laying down new neural connections and keep expeanding at any age as long as you keep using and challenging it with new activities.

I would be wary about trusting anything Rod Jackson says about nutrition! He's the one who calls butter "poison" and wants to tax or even ban it. He's still pushing the "saturated fats are evil" barrow and seems to have rigid views and a closed mind.

Without knowing much about Prof Jackson, many researchers nowadays are associated with research foundations that are highly reliant on funds from industry sources, principally the pharmaceutical industry.

Judith, I recall Allison Roe being admonished during a commercial break during a TV programme about NZers health featuring Prof Jackson. Allison had let it slip that she has a little butter on her bread now and then!

All things in moderation I say - but not in the case of margarine. Zero for that!

i have to say rod jackson is a complete tool! - he's the ban butter idiot....

To be fair: He's entitled to his opinion but so are others. And this has not necessarily been the case during the couple of programmes that he has fronted. The end result has been a lack of balance.

but he is extreme, making comments to the effece that butter is pure bad fat with no nutrients in it, basically calling it empty calories.
before butter was pasteurised it was used to cure circulatory and heart congestion problems! sure a lot of people eat too much of it and it can cause problems but its only a small part of the health problem with artherosclerosis. and now he says suplements are bad, yet the could only quote a coule of nutrients that could cause problems when elevated. its like trying to tell people not to travel in vehicles become some people will get killed or injured, his diet must be rather bland if he has such a hatred of butter. we're all going to die one day, lets not make life anymore spartan than necessaary