Increased intake of vitamin K2 may reduce the risk of prostate cancer by 35 percent, according to the results of European Prospective Investigation into Cancer and Nutrition (EPIC).
The potential benefits of K2 were most pronounced for advanced prostate cancer. Vitamin K1 intake did not offer any prostate benefits.
The findings were based on data from more than 11,000 men taking part in the EPIC Heidelberg cohort. It adds to a small but ever-growing body of science supporting the potential health benefits of vitamin K for bone, blood, skin, and now prostate health.
Source: NutraIngredients.com April 9, 2008
_______________________
Gary Moller comments: 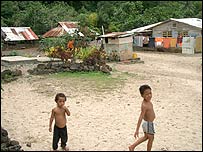 I am convinced that many of the cancers such as prostate cancer and degenerative diseases such as arthritis - and signs of premature ageing, including wrinkly skin, are caused much in part by our predilection with the fat-free diet.

While in Samoa recently, visiting my partner, Alofa's, extended family, it struck me how little there was in the way of degenerative diseases, despite the financial poverty and constant heavy physical labour associated with life in the villages.

I was also struck by the absence of wrinkles. I fully expected to see elderly Samoans with skin that has been weathered by a lifetime toiling beneath the tropical sun, usually without hats, shirts or shade. How wrong I was. New Zealand is "Wrinkle City" compared to Samoa. Samoans are perfectly adapted to their environment and their traditional diet is an integral part of this.

We ate our way through Samoa and did I love the indigenous foods. We were treated to a sumptuous feast three times a day by our generous hosts!

The traditional Samoan diet is incredibly healthy. It is rich with healthy fats and abundant with the fat soluble vitamins (A, D, E and K). Vitamin D from endless days baking in the sun while working the taro patches or fishing on the reef; vitamin A and E from the tropical sea life, including fish eyes; and massive amounts of vitamin K from taro leaves.

Vitamin K is a very interesting vitamin because it is principally found in dark green vegetables like taro leaves and spinach. However; like the other fat soluble vitamins, vitamin K requires fat in order to be properly digested and absorbed by the body. A low fat diet is a guarantee that one will develop a fat soluble vitamin deficiency. In the case of vitamin K, the effects of deficiency is everything from a swollen prostate, poor skin and weak bones to name a few.

I ate taro leaves up to three times a day. What I liked was the leaves were always cooked in coconut cream. The finished dishes were so rich, oozing the goodness of coconut oil - the perfect way to conduct vitamin K into the body where it could work its magic.

Interestingly, the sun spots on my hands, ears and forehead which I have burned off by the dermatoligist every few years have all but disappeared from sight since being in the harsh Samoan sun. How could this be? I put this improvement down to improvements in diet, particularly to an increased uptake of the fat soluble vitamins - something I would not have to consciously think of doing if I were in Samoa, eating a traditional Samoan diet.
at Monday, May 05, 2008