The Drugspotters Guide to the Olympic Games

Amuse yourself during the boring bits of the Games (there's plenty of these) by trying to spot the drugs cheats (plenty of these as well!).

(Please note that the following checklist is about indicators only. A "positive" tick is not 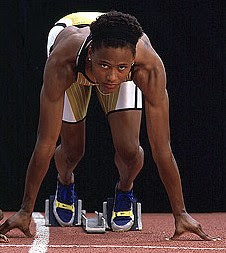 evidence of cheating)
Remember the Tour de France last year: American cyclist, Floyd Landis looked as good as dead to the world after a crucial stage. The next day he stunned the World by riding away from the field and went on to win the Tour. He had cheated: infusing a whole lot of suped-up blood overnight. Or, remember that Australian paddler, Nathan Baguley, who beat Ben Fouhy: caught later on for drugs cheating. Like many of these outed cheats, Landis remains a hero at home.

Sure there is more drugs testing than ever at these Games; but this is farcical. Remember USA drugs cheat, Marion Jones, who cleaned up the medals at Sydney 2000: She was using undetectable designer drugs which were only discovered later on by sheer accident when an FBI investigation of the manufacturer (Victor Conte and Balco Industries) turned up some interesting client records that included Ms Jones.

Drugs testing will not expose the 24 year old athlete who took growth hormone as a teenager to increase his limb length. Nor will it expose the athlete who is doping with a natural method (Such as infusing his own haemoglobin or testosterone) just up to the limit that triggers a positive result; but not quite over. Nor will testing show up the athlete who has used drugs during crucial training stages. And it sure won't catch the designer drugs that we currently know nothing of.

In my opinion, those who are in charge don't really want to catch the cheats. If they did, they would ban the cheats for life and they would go further and go for the real dirty cheats: The officials, the trainers, the exercise physiologist, the doctors and the chemists - and the financers who make up the sophisticated team that perpetrates this sham. These low lifes have no hesitation in sucking in the next naiive and talented youngster and have no hesitation in cutting them loose when caught out. This is no loss to them: There is plenty more young talent where that sucker came from. Why do the the Drugs Police never go for the machinery behind a postiive drugs test? Wiping out the infrastructure is the most obvious measure that is never talked about, let alone exercised.

It is a terrible shame that sport is so tainted with the dirty smell of performance enhancing drugs. These dirty cheats relegate the clean athletes to 4th place or lower as well as into financial poverty and sporting oblivion. When a clean athlete with freakish natural abilities produces a stunning winning performance, their achievement is forever tainted by the cheats about them.

Mud sticks to clean surfaces
The photos of Marion Jones (above) shows her at her winning peak and later on while the Victor Conte scandal was gaining a head of steam. Her loss of athletic form was dramatic, as was her transformation back to a more feminine physique. When I pointed this out in an article at the time, I had a flurry of canceled subs to my blog by members of the USA track and field community. I guess its all right to cheat so long as you don't get caught!

Do you have a question?
Email Gary: gary at myotec.co.nz (Replace the "at" with @ and remove spaces). Please include any relevant background information to your question.
at Sunday, August 17, 2008

now do't be too hard on floyd landis - he was only trying to follow in lance armstrongs footsteps but without the benefit of sponsorship by a huge drug company.....

i would challenge anyone to name one tour de france winner since jaques anquetil in 1957 who was riding clean - certainly not anquetil who was a big time druggie!

Yeah! Floyd's really dumb mistake was getting over-excited the following day and going out from the gun like a crazy bullet, thus drawing so much media speculation that he had to be hung out!