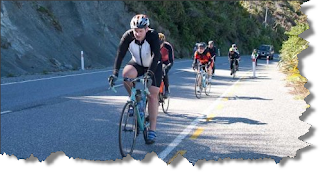 I had a HTMA test carried out on me and have been following its recommendations for just on 2 months. This is my experience of it, although first I will need to explain at least my recent past.
Image left: Jonathan during the Wild Coaster which was about two weeks into the start of the HTMA, "struggling like buggary up a hill".

I am 30 and have been increasing my time on the bike over the last few years to a point where this time last year I had what was probably my best race to date (Source 2 Sea) where I felt I did well in. I had trained hard and found the 160km race easy (I blew away the bunch that I was riding with easily and beat my cycling buddy who I train with all the time). I was down to about 98kg from just over the Clydesdale weight range (100kg). Things were good.

But then over summer I kidded myself at the 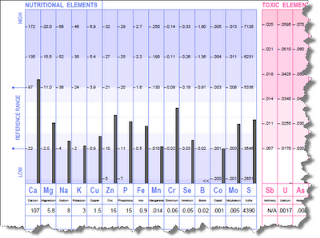 endless BBQ’s parties and quickly put on weight till I rose to a hefty 108kg easily. I rode in the Around Brunner and had the second worst cycling experience of my life. I was cramping on every tiny “undulation” of the ride for the last 50km of the 130km race. It was horrible!

Image left: Chart from Jonathan's HTMA. Excess calcium relative to all other nutrients. Majority of nutrients are low. This is indicative of adrenal and thyroid insufficiency with tendency to gain weight, poor sleep, poor digestion and fatigue among other things. This sort of pattern is common in athletes.

I then realised my mistakes and trained as much as I could over winter but I was still not losing weight. I was doing a 3.5hr ride on the weekend plus at least one more hr ride during the week and maybe a swim. I stayed at the 107kg to 108kg weight range regardless of what I did. It made no sense to me either as I knew that I did not eat ridiculously unhealthily. I knew other people who would eat chips and chocolate etc and not put on weight but with me I was struggling to lose anything and easily putting it back on. Sometimes I would binge a little but this was usually after a large ride. I was feeling like crap going up the hill at the end of winter. I was getting smashed by my riding buddy as well.

I mentioned this to Gary as I had already been following a vitamin plan and it wasn’t noticeably working. He noticed that I was eating about the same as him per day (he weighs buggar all!!!). He suggested that I do the HTMA and I was more than happy to as I was desperate to find out what was wrong.

The results that came back were shit! They showed that I had been leading a modern lifestyle with far too many dairy foods in my diet (which I never suspected as I don’t drink straight milk and the media/advertising go on about all the Calcium we are “supposed” to need). I was getting it from too much cheese, yoghurt and milk from take away coffees. I also had really high (as in way off the chart) ratios between Calcium to potassium and magnesium which balance each other as nutrients along with a slow metabolism.

The HTMA suggested a change in eating habits, change in foods and a crap load of vitamins to correct the imbalance over the next 3 months. Gary said that you can just do it by nutrition alone without the vitamins but it will take much longer. I thought “if I am going to take some persons advise, I may as well do it properly and to the letter so that if it doesn’t work then I know I did my best". I know for sure that it doesn’t work (you will always have that doubt in the back of your mind if you don’t do something in its entirety as to if it works or not).

I knew it would be hard as I used to eat 3 large meals a day. If I didn’t feel full after a meal then I would be hungry till I did fill up. The HTMA suggested that I change to eating 5 or 6 small meals a day and change to a low calcium diet with at least 40% lean protein and the rest natural unprocessed foods etc (stuff Gary preaches often but I had never implemented… sigh).

This meant that for the first 7 days it was sheer will and determination that kept me going as I was hungry all day every day. However I dropped like 3kg and 2% body fat in 2 days!!!!!

The results were staggering in the beginning. The flab was just dripping off me. I found that you really had to be prepared in advance for your day by ensuring that you would have adequate food for the whole day. If I didn’t prepare and make my own food then there are virtually no quick options to buy suitable food elsewhere. It took a lot of will power because when you make a major decision such as this it seems that all the wrong food is shoved in your face on a regular basis. Even your mates seem to conspire to force you from your diet by trying to get you drink with them or force some ridiculously bad food on you.

This is when it actually got harder as the fat didn’t fall off as readily. I actually had to be more disciplined to lose the weight and by this stage my mind was playing tricks by trying to tell me that it was alright to eat that thing that isn’t on my diet as I had lost so much weight anyway.

I have found now though that I am riding faster and further than ever before. I am easily riding with much larger cogs going up a hill and easily recording faster times. I have not quite caught up to my riding buddy as he has been putting in a lot of hours and he has shot off. But I am still riding faster than I have ever before. To let you know how far I have come, just before I started this diet I was about 1.5 minutes behind my riding buddy up a hill that takes about 10 minutes to climb. That is a huge margin. However a couple of weeks ago I raced him up the same hill and beat him!!

The next month I want to get as close as I can to the 20% body fat mark or under if I can. Then relax the strictness in my diet a little and aim to rip up some cycle races during summer. I have to say that it feels great to shed that weight and I do not feel nearly as self conscious already. Can’t wait till the 3 month mark and I will feel any better. If you have been thinking or trying various diet fads then instead of that try the HTMA and get a scientific report of where your health is at so that you quickly correct any problems that you might have.

Jonathan's metabolism had been steadily shutting down, mostly as a consequenceof relentless stress and poor eating habits. Welcome to the modern workplace! And then we are urged to go to the gym, run a half marathon etc in our free time. Bit like a double beat-up if you ask me!

The mechanism of this metabolic shut down centers about the adrenals. As they shut down, so does the thyroid gland. The consequence is feeling tired and depressed and the fat piles on while muscle is lost and they hurt. Once in this metabolic hole, the spiral is downwards as the person becomes increasingly depressed and desperately resorts to all kinds of crash diets which only makes matters wose.

Jonathan is using Salter 9106 Body Composition Scales to track his changes in wieght and composition. Weight changes alone tell only part of what is happening inside his body. He is a big boy, so once he is down to about 18% that will be enough fat loss. The emphasis should then go onto gaining more lean muscle by percent. Less than 12% fatness for a male is getting too thin.

The combination of the ICL Hair Tissue Mineral Analysis (Profile 2), the Brett Elliot Herbal Detoxification programme and a set of body composition scales are powerful tools for bringing about lasting weight losses and improvements in health and fitness. It frustrates me that millions are spent on unhealthy, invasive and risky weight loss measures, such as stomach stapling, yet there is no funding for simple and effective measures such as the programme being followed by Jonathan.

Do you have a question?
Email Gary: gary at myotec.co.nz (Replace the "at" with @ and remove spaces). Please include any relevant background information to your question.
at Tuesday, December 01, 2009