"...managed to do a shade under 13 hours and had a day that went pretty much according to plan.  I think I was 32nd overall, and 21st in my category.  Pretty stoked with the result, particularly after the disappointment of last year.
The only thing I really battled with throughout the day was cramp.  I got it in my hammies and quads coming off the first bike and it stuck around for about the first 30-40mins of the run.  The old magic Cramp Stop spray kept it at bay for the rest of the day but I would be keen to try and understand what I can do to prevent this in future."
Martin Leighton (Adventurer)
Coast to Coast website.
___________________________________
Gary:
Congratulations Martin on what must be the "most improved of the year".

Just to give you an idea of how spectacular Martin's improvement in form has been consider this: 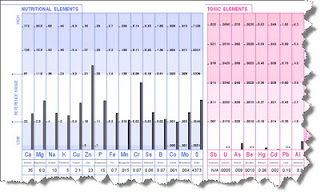 I first met Martin when he came to me for assistance with a chronic knee injury that had him reduced to paddling and aqua-jogging.  He was unable to run or cycle without pain.  This was not a good situation at the time of his programme which should have him cranking out peak miles in all three Coast to Coast disciplines (Cycle, run, paddle).

The underlying cause of his injury was evident:  Physical exhaustion, including nutrient imbalances that were leading to poor healing.  This was confirmed by the results of a Hair Tissue Analysis (Refer Chart left).  The pattern present in the chart is typical of adrenal exhaustion.  The high zinc relative to everything else, especially copper is indicative of a zinc metabolism disorder that can lead to poor healing and increasing soft tissue fragility, including the tendons and ligaments.

On examination, his muscles (Arms, legs, shoulders, buttocks and back) were found to be riddled with painful knotting and inflammation.  This is typical of adrenal exhaustion.

Martin immediately commenced a programme of deep tissue massage to free his muscles, along with dietary changes and nutrient supplementation to address the underly imbalances and deficiencies as identified with the Hair Tissue Analysis.

To Martin's credit, he took on every piece of advice and spared no expense in getting things right (Time was of the essence with the Coast to Coast in the first week of February!).

He was cycling the next day and cautiously into running (Rest longer than about three days is usually counterproductive to recovery in the case of most injuries of non-violent causes).

As we moved closer to the date of the Coast to Coast, the dietary supplements were adjusted to be increasingly focused on supporting athlete performance - the ability to sustain high work outputs over an extended time and to aid fast recovery.  I am not saying specifically what we did for Martin because the mix of diet and supplements varies according to an individual athlete's needs.  There is no "one-size-fits-all" formula.

The result of all this work is that Martin had a remarkable restoration in energy, his knee injury simply disappeared and he went on to blow away last year's performance.

So what caused the leg cramps at the beginning of Martin's run?
The key to doing the perfect race is pacing: Winding steadily into the race in such a way that the aerobic systems can keep up, not unduly force the body into glycogen-wasting anaerobic metabolism, and maintaining a pace which has the athlete completing the second half of each leg of the race slightly faster than the first.

This is not easy to do with the pre-dawn start of the Coast to Coast being a mad dash over the dunes to the bikes and then a mad scramble to get into the leading bunches before settling down (yeah right!) for the majority of the first cycle leg which just happens to be an over-extended climb up into the Southern Alps!

The consequence of all this intense effort is severe depletion of muscle glycogen, especially of the thighs.  This will lead to cramping of the depleted muscles if ongoing effort is little more than about 50% of full effort.  The tendency to cramp may lessen with time as lactate is gradually cleared from the muscles and circulation and some glucose is returned to the muscles via digestion and resynthesis of lactate by the liver.

Prevention is best.  Martin did everything right nutrition-wise; but missed out on one essential for preparation: Racing on bikes!  Cycling, like swimming and paddling are unusual in that the only way to really condition the body for the intensity of races is to race.  It is very difficult to race harden the body for the extremes of racing by individual training on its own.  If Martin had participated in a series of intense cycle club races then he would have breezed through the first section of the Coast to Coast, with less depletion of critical energy reserves.  In addition to the physical hardening that comes with bike racing, the rider gains invaluable experience of working efficiently within a peleton - a master of smooth acceleration, energy conservation and one revolution ahead of the rest with regards to tactical decisions.  What I am talking about in the way of racing is track racing and short, intense 20-40km road races.

_______________________________________
About this website
The advice in these articles is given freely without promise or obligation.  Its all about giving you and your family the tools and information to take control of your health and fitness.  Please give me your support by subscribing to my free email updates. Please shop at my Online Store. Please encourage your family and friends to do the same. While we may not always be able to compete with the big operators on price, we aim to more than compensate through personal service!

this is great info to those who does triathlete... i'm a swimmer, but its been a while since i had been on my bike, probably half a decade or more, should try it out again...