Do Metal-on-Metal Hip implant devices cause illness from metal toxicity?


In an interview on New Zealand National Radio this morning about the recall of some metal-on-metal hip implant devices Medsafe's, Dr Stewart Jessamine, stated that there was not a problem with toxicity caused by metal getting into the blood stream as these devices break down.

I don't think he can confidently say this because there is growing evidence that ions from metals used in these devices, such as chromium and cobalt, may cause ill health.  Here is an excerpt from an article that outlines some of the concerns that Dr Jessamine has dismissed.

"The most disturbing of these questions concern reports of "a small number of patients who may have developed symptoms or illnesses elsewhere in the body (systemic effects), including effects on heart, nervous system, and thyroid gland," according to Sena.

The worry is that the metal-on-metal contacts in the hip replacements grind off tiny metal molecules -- chromium and cobalt ions -- that might be toxic. Or not: There's not enough information to prove that the metal ions actually cause the adverse events that have been reported."
Source: http://arthritis.webmd.com/news/20110513/metal-hip-replacements-toxic-effects 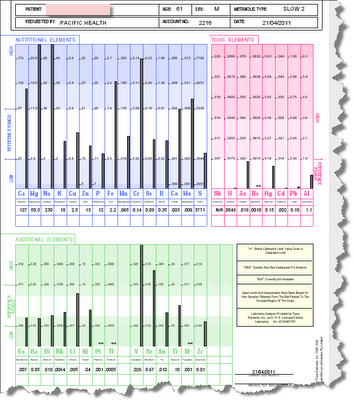 We are talking about parts per million here - very, very tiny amounts of these metals may all that is required to have profound adverse effects on the human body.  The amounts can be so tiny that they will not show in a blood test but they will show in a Hair Tissue Mineral Analysis (Which may explain why certain parties do all they can to discredit this valuable forensic test).

Here is the first and a repeat Hair Tissue Mineral Analysis (HTMA) of a 62 year old man who has had a metal-on-metal hip implant.  He has been suffering from a number of health problems, the most serious being an irregular pulse which, at times, requires medical intervention,including medication and defribillation.  Needless to say, this is highly distressing for him. 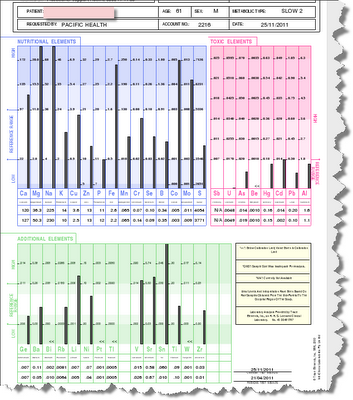 When viewing his HTMA charts there is consistent, though varying evidence, of excessive levels of elements such as chromium, cobalt, tin and vanadium.

This raises the question: "Where did these come from?"  Since this is an unusual mix of elements to find raised in the hair of a human being, the smoking gun has to be the metal-on-metal hip implant which is known to release trace amounts of toxic metals into the body.  Is it mere coincidence that this person has worsening heart problems after having this hip replacement?  I suspect there is a link that is worthy of further investigation.

If you know of anybody who has had a hip or any other kind of joint replacement, please encourage them to contact me about getting a Hair Tissue Mineral Analysis completed.  The only way we can prove if there is a link or not is to do many of these tests and see if we get a familiar pattern of results.
__________________________________________
Here's an excerpt from the Medsafe press release:
41 New Zealanders who received a MITCH THR hip implant device are being contacted by their surgeons after an international recall of the device.
Data from overseas joint registries indicate there have been higher-than-expected failure rates in the metal-on-metal hip device at the three-year point following implantation.
Dr Stewart Jessamine, Group Manager for Medsafe, says the primary cause of failure is loosening and movement of part of the hip joint replacement.
“As a result of the increased failure rates, patients who have this implant will need to be followed up annually for the life span of the implant. “
Source: http://www.medsafe.govt.nz/hot/media/2012/RecallHipImplantDevice.asp