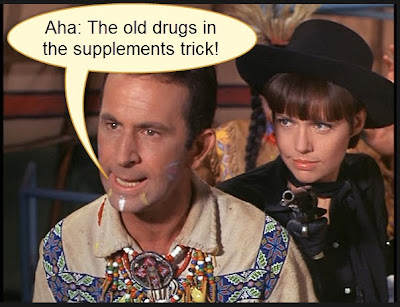 I was not intending to get pulled too deeply into this latest drugs scandal affecting sport; but I have just been listening to news reports in which the Jamaican athletes and their agents are blaming various sports supplements for returning positive drugs tests.  They are arguing that there were off-label drugs in the supplements and that none of them knowingly took anything illegal. What has got me going is the bias of this reporting.  Where is the counter-view to provide journalistic balance?  Well here is my effort to provide some balance.

These athletes are not idiots - well, I hope not.  They are millionaire professional athletes cared for by managers, sports medicine doctors, exercise physiologists, coaches, and trainers.

If there was ever a question about the legality or safety of any ingredients in a sports supplement then any of these people with half a brain would be seeking the advice of WADA (World Anti-Doping Agency) http://www.wada-ama.org/.  In fact, just about all they would need to do is get online and look up the WADA list of banned substances.   Here it is: http://list.wada-ama.org/.  It can all be done in a matter of seconds.  Go on - give it a whirl!  All top athletes and coaches are required to attend courses about WADA and doping procedures.

Douglas Laboratories (The main one I use) has been around for over 50 years and has the highest quality rating possible.  These guys know that, if they allowed even the slightest bit of "crap" to get into any of their products, the FDA would respond with an armed raid and they would be shut down overnight!  No kidding.  The US authorities are that ruthless when it comes to cracking down on the natural health industry sector.  The point is, no reputable dietary supplement company would ever allow a contaminant such as ephedrine or a steroid to get into their processing line, deliberately, or by mistake.  Athletes of the standard and wealth that are the subject of this current controversy would surely be using only the "Best of the Best!"???  Surely!

Blaming a sports supplement is becoming the most popular defense for drugs cheats. If there are "hidden" drugs within a supplement that result in a positive test, then I ask this question:

"How many athletes have sued a supplement company for damage to their reputations and loss of income as a result of producing a positive drugs test after taking a supplement with an undisclosed prohibited substance in it?"

The answer is, as far as I know: NIL!

And it will be interesting to know how many of the current flock of Jamaican athletes who have produced positives end up suing their supplement company.  The answer to this will be telling.

The Eastern Bloc were once dominant in sport with the help of widespread doping.  With the collapse of the Soviet Empire and the consequent diaspora of their coaches and chemists, new blocs arose, such as the female Chinese swimmers and middle distance runners of the 90's.

Mike Hewitt/Allsport/Getty Images
From nothing to four Golds at the 1992 World Champs and the 1992 Olympics to 12 Golds at the 1994 World Champs. That kind of improvement is questionable. At the 94 Asian Games, 11 Chinese women swimmers tested positive for dihydrotestosterone; at the 96 Olympics they only won a single gold medal, and no positive tests. 98 World Champs and four swimmers tested positive, plus human growth hormone was found in a swimmer's luggage. Before the 2000 Olympics, China removed four women from its squad for odd test results and no swimmer from China earned any medals. At the 2004 Olympics, none of the swimmers tested positive and they earned one gold medal. That is a a lot of up and down in the medal count, and a lot of positive drug tests.
http://swimming.about.com/od/swimmingolympics/tp/Olympic-Swimming-Controversy.htm

More recent examples  are cycling's "Team Armstrong".  Interestingly, it appears that "Team Alberto" has found a loophole in the form of hypothyroidism, allowing their medically diagnosed hypothyroid runners to be injected with thyroxine prior to running onto the athletic track!  Some speculate that the Brits may have cracked something prior to the London Olympics, giving many of their athletes the "Edge".  This "Edge" may be the case for Brit Team Sky and its star Chris Froome; but we may never know!  Oh - I almost forgot the Jamaicans - silly me!

In my opinion, athletes at this level are meticulous about everything that enters their bodies.  If a supplement is taken that contains a performance enhancing substance, they and their team of experts, will know of it presence and its exact function.  If a performance enhancing substance has been taken and has not been disclosed, then the most compelling reason is obvious: Willful concealment.

It would appear the Jamaican athletes are now being coached to consistently point the finger of blame at supplements that they claim were taken in good faith and without knowing they were contaminated.  This is legal and public relations process of "Circling the wagons", preparing for the legal defense that will have these athletes exonerated, or given a lesser sentence, on the basis of creating the element of doubt.

In this process of protecting themselves, by pointing their fingers at others, they end up causing collateral damage to businesses like mine.  That makes me angry.

All articles by me about doping in sport:
http://blog.garymoller.com/search/label/doping

About this website
The advice in these articles is given freely without promise or obligation. Its all about giving you and your family the tools and information to take control of your health and fitness.
Candida and Fungal Infections? Gary Moller recommends you explore this programme: Click Here!
at Tuesday, July 16, 2013